Life at Noon: An exploration of the life of Talasbek Asemkulov 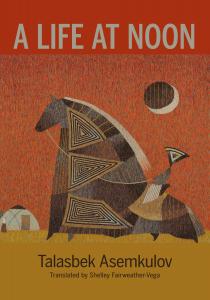 Join us for an exploration of the life and work of the late Talasbek Asemkulov, focused on his autobiographical novel A Life at Noon (Taltus) that has recently been published in English by Slavica Publishers (Indiana University).

Asemkulov was a one-of-a-kind Kazakh cultural figure who knew intimately the secrets of traditional Kazakh music and culture and preserved them through the difficult Soviet era. He was an extremely talented musician, scholar and writer, and always claimed that Kazakh music, with its central ideals of Death and Love, was music for warriors. In Kazakh culture, musicians and warriors were considered almost to be equals. Asemkulov also famously said that “Music is the only thing that can go head to head with death.”

In A Life At Noon, Asemkulov tells his own alternative history of Kazakh music, a story that is captivating and full of drama. Perhaps even more importantly, the book is also a history of the Kazakh people through the tumultuous 20th century, through war, collectivization, famine, persecution, humiliation and the search for new identities and ways of life. Readers experience the story through the eyes of Azhigerei, a young boy who learns the history of his people as he grows up on a Soviet collective farm in Kazakhstan in the 1960s, listening to the stories the old men tell.

The event will feature a reading and discussion by Life At Noon translator Shelley Fairweather-Vega, well-known ethnomusicologist Alma Kunanbayeva, and Fulbright scholar Raushan Jumaniyazova, who coordinated the project to translate the book from Kazakh. We will discuss Asemkulov’s life and art with a focus on this book and what it means for Kazakh culture, how it has been received in the English-speaking world, and the translation process. Copies of the book will be available for sale.