The Magic of Mugham: Mystical Music of Azerbaijan 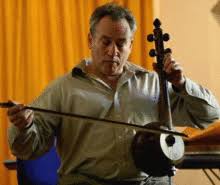 A concert by Jeffrey Werbock
Performing on oud, tar, and kemancha

Tickets $15 advance/ $20 at the door; http://magic-of-mugham.eventbrite.com

Azerbaijani mugham is monophonic modal music, highly microtonal, meter free, densely ornamented, composed of complex melodic lines that are somewhat improvised according to the eastern tradition of theme and variation, and convey a mix of sorrow and joy, exhaltation and lament, and an overall sense of both antiquity and otherworldiness.

Mr. Werbock has been giving presentations for well over three decades and has performed often at Lincoln Center, the Metropolitan Museum of Art, the American Museum of Natural History, Asia Society, World Music Institute, and presents lecture demonstrations at colleges and universities all over the English speaking world.  He has been awarded an honorary degree by the National Music Conservatory of Azerbaijan, in Baku, and was recently sponsored by the Ministry of Culture of Azerbaijan to perform a solo concert.

Calendar powered by The Events Calendar